Before an app can be published, a release version must be created in Purple DS Manager. This process creates the files that you can then save and upload to the Apple App Store or Google Play Store.

Creating a release app is one of the last steps before a submit. It requires various information that is not required for a preview app.

How to add this information is explained in theses articles:

The following steps will describe, how to create a release App in Purple DS Manager. Starting point is the Overview page of your App.

NOTE: A release app cannot be installed directly on your device as it is intended for distribution via an App Store.
For Apple, you can use the tool TestFlight to install and test this version.
Android offers a pre-release as a beta test app.

If you want to install an existing preview version of the app after building a release app, you can do this via the QR code. After resolving the link in the QR code, a browser window opens. Below the platform logo, you can see the last built app version. This is offered as the standard download.
Below is a link to other versions you have already built in Purple DS Manager.
Click on Other versions (step 1) to open a pop-up and display the other available versions.
Select the preview version (step 2). This is then easily installed on the device. 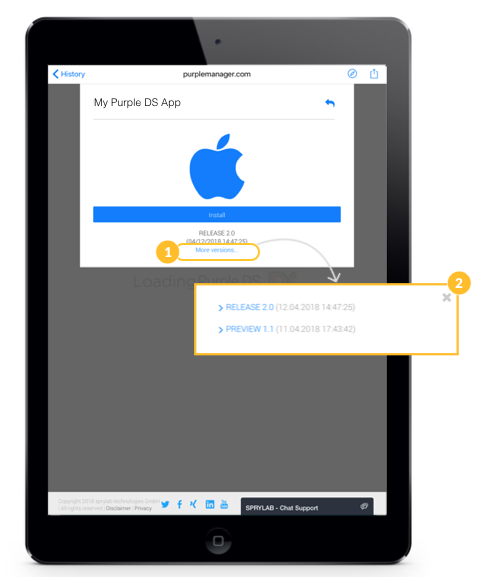